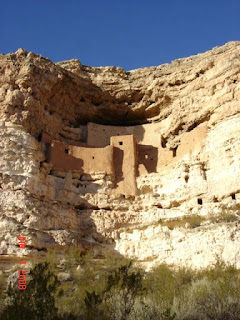 Montezuma’s Castle is an imposing 20 room, 5-storey structure built into a recess in a white limestone cliff about 70 feet above the ground, with a river rushing by at its foot. When first discovered (without a souvenir shop) the ruins were thought to be Aztec in origin. So they decided: Hey, what the hell, let’s name it after Montezuma. Along came some Park Rangers who said: “No, it belongs to the Sinagua Indian peoples who farmed the surrounding land between the twelfth and fourteenth centuries, long before Highway 89A.

That didn’t stop people from still calling it Montezuma’s Castle. If you know anything about real history, you know that Montezuma entertained the whole US Marine Corp in his hall. After that wild party, he decided to get away, and where did he decide to go? A place named after him, of course. Well, legend has it that he never made it. Apparently, the Marines made such a mess in his hall, which Mrs. (or is that Ms.) Montezuma made him stay home and clean it up. As Jack Paar would say: “I kid you not.“

This has nothing to do with Montezuma’s Revenge, which should be another blog, someday.

Looking for revenge? Send a bomb, clearly marked; “Bomb” to: joedelbroccolo@yahoo.com, tell him: “Here, expand this.”
Posted by Joseph Del Broccolo at 12:00 AM