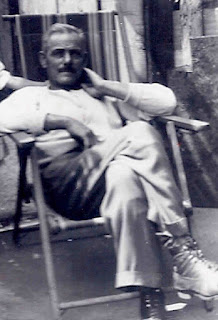 He was the quiet, silent type, who worked hard and took orders from him bride, Grandma Francesca.

Grandma Francesca had a big family, kids, grandkids and many followers from her church where she organized bus rides to upstate grottos and trips to Italy to a children's orphanage raising money to rebuild lives shattered by the war.

Grandpa Rafiello had a horse and wagon, and a dog named Ginger.

Several times a year grandma would get a busload of people and gather the food and drink and off to the mountains and wilderness of the Empire State, then turn the money from those who went, to Our Lady of Loretto on Sackman Avenue in Brooklyn. But her big thing was that trip to Italy and the place that was named after her for all she did for the orphans who lost their parents to the Fascista and Nazi terror that made them orphans.

Every morning at 3:00 AM, Grampa would hitch the horse to the wagon, call Ginger and off the three of them went to the Hunt's Point Market in the Bronx. One would think it crazy that at THAT hour to do such a thing, but owning a fruit store and pizza restaurant was hard work, and to maintain business, you needed fresh produce and meat, plus a very cranky Grandma if he didn't get moving. 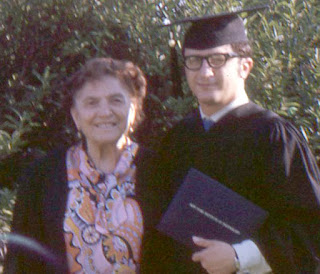 It was a long trip from Brooklyn to Hunt's Point, and the horse did it every morning, stopping at red lights and moving on green ones. Once arriving at the destination, the horse would stop and Ginger would bark, waking up Grandpa, who had fallen asleep before the horse took his first step!

Grandpa was from the old school, quiet, strong and could have a mean streak if you didn't do things right. He was a ‘Jack of all trades' and often was seen when he wasn't "resting my eyes" with a hammer on some project, or a trowel in his hand, or when not fixing his plumbing.

Suddenly in the middle of the night, the room came alive with the rumble of what at first seemed like a train! I awoke and heard the noise, made sure I wasn't on a track and noticed we were all up, except for Grandpa. He was pounding the air with his snoring and snorts, swearing in his sleep in good old Neapolitan, with great enthusiasm. Grandma marched into the kitchen and threw a towel over his face that caused him to stir and end his tirade. Grandma had put out the nocturnal fire.

Grandpa loved Grandma, and she loved him. They never outwardly showed affection, but in their hearts, you knew it. He cared for her and she cared for him, always telling him what he should do, whether he wanted to end his nap or not. Grandma always got the last word in: come to think of it, she got the only words in.