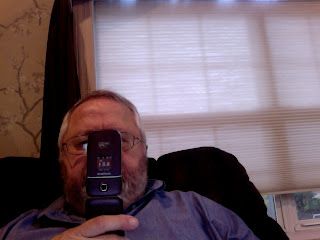 The other morning I was getting dressed when I took my cell phone, and realized I hadn’t turned it on. Not only hadn’t it been turned on, I had messages on it from two weeks ago, that just now became apparent!

I’m not good with my cell phone, and never have been. I actually hate it, hate when it rings or buzzes, or when I have to recharge it. It is by comparison a simple phone, not too complicated, but complicated enough for me to ignore half the things it can do for me. These things were never an issue when a cell phone was not a thing of the present, but seems to be important now.

My other problem is that since I forget to turn the thing on, I get these messages and don’t respond and feel bad. Does the person who called me realize I might have forgotten to turn the damned thing on and am not ignoring them?

Life, with all its modern inventions to make things easier, is complicating my life. Years ago, when you wanted to download info, you went to a library or opened a book or newspaper. I remember as a little kid looking at the Encyclopedia Britannica and being impressed that everything there was to know was in those books, or that you could know what happened today by waiting for the 6:00 pm news on the TV or turning on your radio, now you can see it happening!

And now the latest thing is downloading apps. What the hell is that about? Apps, is that short for apples?

Ok, I was a big supporter of computers, had a talk with my boss many years ago about going to computers, learned a lot of programs and used them all. I got very comfortable using one when all of a sudden, they had laptops and then Ipads and Iphones and Blackberries and downloaded apps and email messages that say they were sent on their I-something or other. Frankly, it’s starting to piss me off!

Even the Little Woman (TLW) has gone electronic on me! I couldn’t talk her into using a computer once, then tried to talk her into getting a laptop for herself. She resisted so I got her one and now she uses it everyday. Then I suggested I buy her a Kindle or Nook and she said: “No, I like a book, the feel of the real thing!’ So she carried the real thing around and so I went out and bought her a Kindle: that is all she uses now. Cell-phones became another issue, wouldn’t think of it, today she calls me everyday on her lunch hour on her cell phone.

AND ANOTHER THING, IS IT CELL PHONE OR CELLPHONE?
Posted by Joseph Del Broccolo at 12:00 AM

I hate cell phones. People are walking under buses while checking their damn phones. I see people walking in the park on their phones at 6:30 am. Who the hell are they bothering at that hour! Enough.